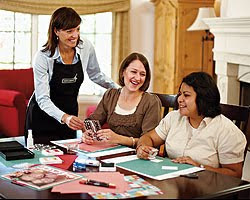 Plans are finalized for our Weekend Retreat in May. WOOHOO!! :o)

If you would like to stay over night but don't have any roomies please let me know that in the comments section of the attached registration form, and I will do my best to find you one.

It's gonna be a great time so don't miss out!! Registration is now open, and payment is needed ahead of time. It is first come first serve.

If you have any questions please let me know. Feel free to pass this along to all your friends, family, co-workers, etc. The more the merrier!!
Posted by Keeley Kirwan at 8:59 PM No comments: 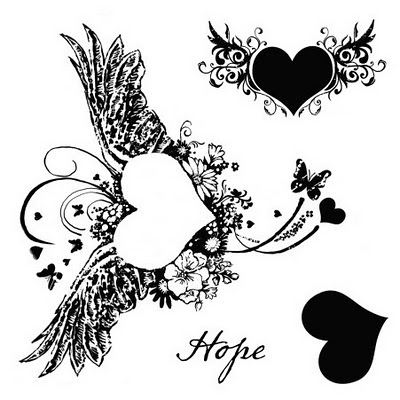 We've all been reeling with the images of tragedy and devastation in Japan. Here is a fun and creative way to help out our friends overseas.

Typically, our A-size sets retail for $7.95, but the "Hope for Japan" set will be available through April 30 for just $5--and Close To My Heart will be donating 100% of the profits to the American Red Cross to benefit relief efforts in Japan.

You can place an order HERE, and it will be sent directly to your home.

If we all do a little, together we can do a lot. Let's show our support and together, provide real HOPE for Japan!! 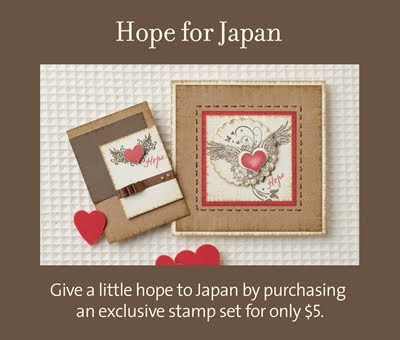 Posted by Keeley Kirwan at 8:42 PM No comments:

The My Acrylix® Miracle Workshop stamp set, exclusively available in the Miracle Workshops on the Go™ kit, includes two stamp images that make it easy for you to create darling pinwheels. Watch the video to find out how!!

Below is a close up of the stamp set used in the above video. It is from the Miracle WOTG kit. 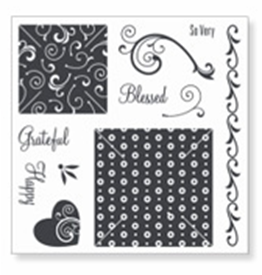 To Purchase the Miracle WOTG Kit or any other CTMH Products you can shop my website HERE!!
Posted by Keeley Kirwan at 11:52 AM No comments:

Use the 2" Scallop Circle Punch (Z1392) with coordinating My Acrylix stamp sets to create artwork that is quick, easy, and darling!! 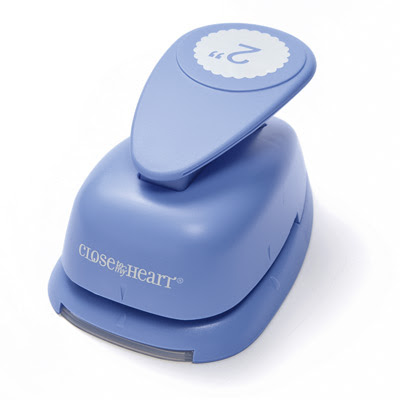 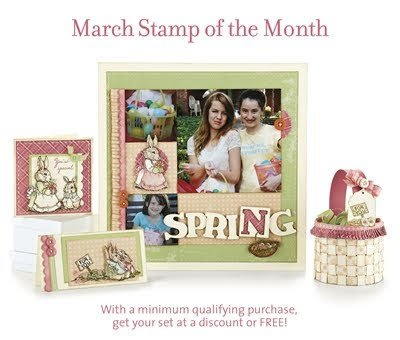 Every month Close To My Heart offers you an exclusive My Acrylix D-size stamp set FREE or at a large discount.

The stamp set is available to qualifying customers for that month only. It’s our way of saying thank you, and your way of getting fantastic deals on our amazing stamps!

Here’s how to get a fabulous deal on your very own Stamp of the Month!! 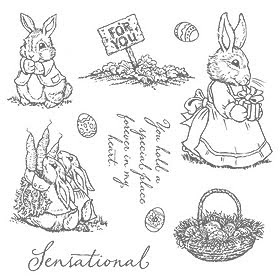 March's Stamp of the Month Is: Sensational Season (Set of 10)

For more information click HERE!!
Besides the adorable cards and layouts pictured above, check out this super cute idea that you can do with this very versatile My Acrylix Stamp Set: 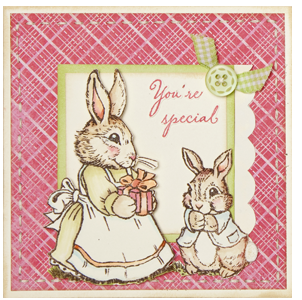 Posted by Keeley Kirwan at 9:54 PM No comments: 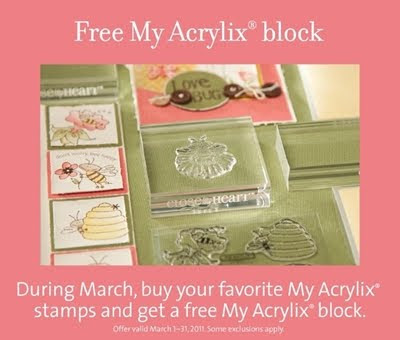 At Close To My Heart, we know we've got the best clear stamps and blocks — and we'll prove it!!

Throughout March, when you buy My Acrylix® stamps, we'll give you a free My Acrylix® block.

This campaign gives you a chance to build you block set simply by buying the stamps you've already fallen in love with!!

With this campaign, you can take the money you'd normally spend on blocks and spend it on a new stamp set, expanding your creative possibilities!!

To start your shopping click HERE!!
Posted by Keeley Kirwan at 9:27 PM No comments:

Just wanted to apologize for being MIA for an entire month!! WOW did a lot happen in February!! I'm gonna start with the positive because there was sure a lot of negative that happened...LOL!! I can look back at most of it now and laugh, but at the time I was pretty upset.

The Good...
As most of you know, Close To My Heart had an awesome February Campaign called Free, Free and Fabulous. I was super excited to have 4 fabulous gals join my CTMH Team - From the Heart Embellishers!! Heather from California, Alicia from Oregon, Stephanie from Wisconsin and Mary Jo from Washington!! How cools is that?!?! This was the highlite of my month. They have officially made me an Executive Manager with Close To My Heart!! WOOHOO!! Thanks Ladies!!

The Bad...
Out Samsung TV of 6 years died. The colorwheel shattered so Sean ordered a piece to hopefully fix it for $102. He completely tore the inside of the tv apart...there was not a single component left in the unit. Once the part came a few days later he luckily (and with some skill...LOL) was able to repair it. It is now back to normal...Knock On Wood.

and The UGLY...
Thursday, February 9 I had gone to dinner with my mom and dad, hubby and kiddos. My parents were in town to watch our kids for a long weekend while Sean and I went to Las Vegas to go see Garth Brooks.

When we finished dinner, I decided to go back into work around 7:30pm to finish up some things so that I didn't stress out about having a lot on my plate when I got back to work on Tuesday. Around 10:00pm I decided to head home. I was about 3 miles from my house when I stopped for a red light. I was stopped and just happened to glance in my review mirror when BAMB...a Lexus SUV smashed into the back end of me pushing me half way thru the intersection. I couldn't believe it.

It gets even better.

She proceeds to try and drive around me and nails me for a second time pushing me thru the intersection!!??!! Oh how kind of her?!?!? What the heck?!?!

Oh the story isn't done quite yet.

She then pulls around me and drives in the PDQ Gas Station Parking Lot and sits for a few seconds.

I was in such a daze I didn't know what the heck happened. I knew it was a cream colored Lexus SUV, but I didn't catch her plates. Luckily 2 witnesses stopped who had gotten her plates. When the police came they told them what had happened. Turns out that another witness who heard the accident got her plates when she pulled into the PDQ Parking Lot. Thank Goodness. I'm so thankful they stopped and helped out!! I was very ticked off about the whole incident and really ticked off that it was the night before we were to leave to go to Vegas!!

I declined having to have an ambulance as at the time nothing hurt. After having to talk to the police officer and the tow-truck driver I was starting to have pain between my shoulder blades and neck. So my dad and husband took me to the ER to get x-rays taken. They put me in a neck brace to be safe. Everything came out fine. They gave me a prescription for Vicadin and a muscle relaxer. So we headed to Walgreens to get me some drugs and then to Taco Bell to get some food so I could take the drugs...LOL!!

We got home around 2:00am and quick packed our clothes for the trip. I was in bed around 2:30am. Man did that alarm at 5:30am come quick. So off to the airport we went. I took my drugs and slept all the way...it was great...fell asleep before the plane even took off and had to be woken up when we landed...LOL!!

The trip was awesome!! I was pretty sore and stiff, but we made the best of it. Garth Brooks at the Wynn was AMAZING. It was just him and his guitar. Trisha Yearwood even came out to sing with him. How Cool!! Definitely choose the 10:30 show if you get the chance to go as the 8:30 one had to end by 10:00. He played until 1:30 am for us!! AWESOME!!

When we returned it was insurance companies galore. We found out my 2008 Toyota Sienna XLE had been totaled out with $19,000 damage. YIKES!! We got our insurance check and bought a new 2011 Toyota Sienna SE. I LOVE IT!!

Now we are still dealing with insurance as far as medical bills go because I am having to see a chiropractor due to neck and upper back issues.

Oh yeah...I forgot to tell you. She was arrested for OWI (Operating A Vehicle While Intoxicated) and Hit-And-Run. I can't tell you how thankful I am that my kids were NOT in the vehicle with me. I seriously think things would not have gone so well for her if you know what I mean...LOL!!

So with all that stress I think my immune system was running on fumes so I took on a HUGE headcold complete with headache, sneezing, sniffling, coughing, etc. I am finally on the mend and not needing to carry a Kleenex box around with me every where I go...LOL!!

I am now ready to get back to business as usual!! So hopefully you will see me posting on my blog on a regular basis again!! I've missed you all!! Get ready to get your crafty groove back on!! I sure am!!
Posted by Keeley Kirwan at 4:58 PM No comments: 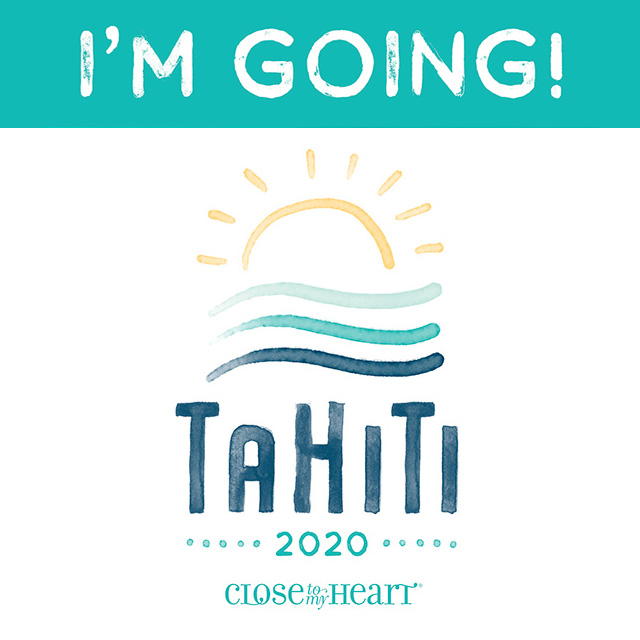 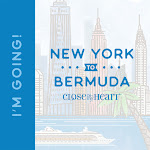 Keeley Kirwan
Madison, WI, United States
I am a proud wife of 17 years to my husband, Sean, and mom to an energetic 12-year-old boy, Nathan, and a beautiful 9-year-old little girl, Morgan. I work full time for a biotech company in Madison, WI as a Customs Production Planner. I am also a Close To My Heart Senior Director / Independent Consultant, 11x Award-Winning Recruiter and 7x Incentive Trip Achiever. Let me show you how to celebrate relationships through discovering your creativity, to preserve and share the moments that matter most!! 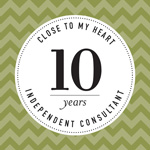 Connect with Me Thru:

Madison's Crop 'Til Ya Drop 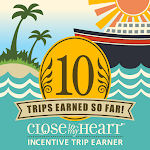 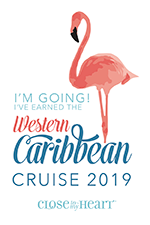 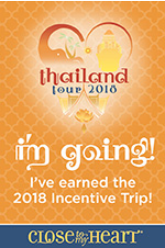 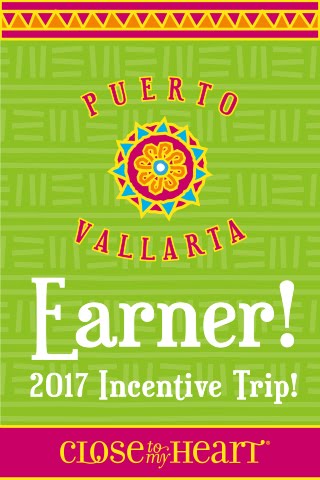 I EARNED the Eastern Caribbean Cruise!! 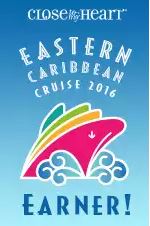 I EARNED the Hawaii Land Tour!! 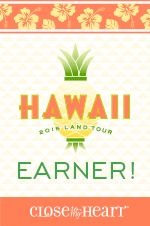 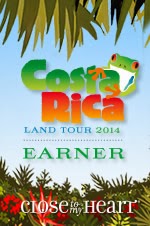 I EARNED the Southern Caribbean Cruise!!

I EARNED the Hawaiian Cruise!!

Save up to 30% on Story by Stacy™ Story Starter Workshop Kits Get a jump start on preserving your memories with Story Starter — a fun 4″ × 4″ workshop kit that walks you through the steps of uncovering meaningful memories related to the people, places, and things you love!Individual workshop kits and stamp sets are available at 20% off; buy the workshop kits and stamps bundled together to save 30%!! You can also receive your choice of one of the featured stamp sets FREE when you sign up as a Consultant or host a party of $350!! 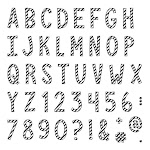 View It Online!! (Only Available thru December 31)

Join My "From the Heart Embellishers" CTMH Team Today!!

CTMH's New Consultant Kit is available for ONLY $75!! Click the above image for more information. 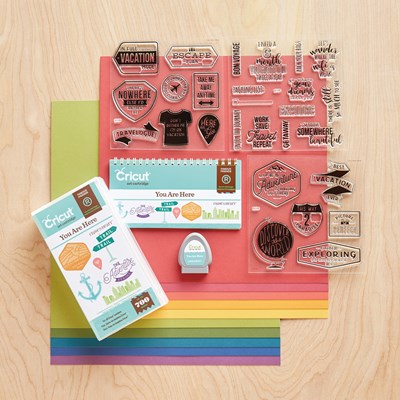 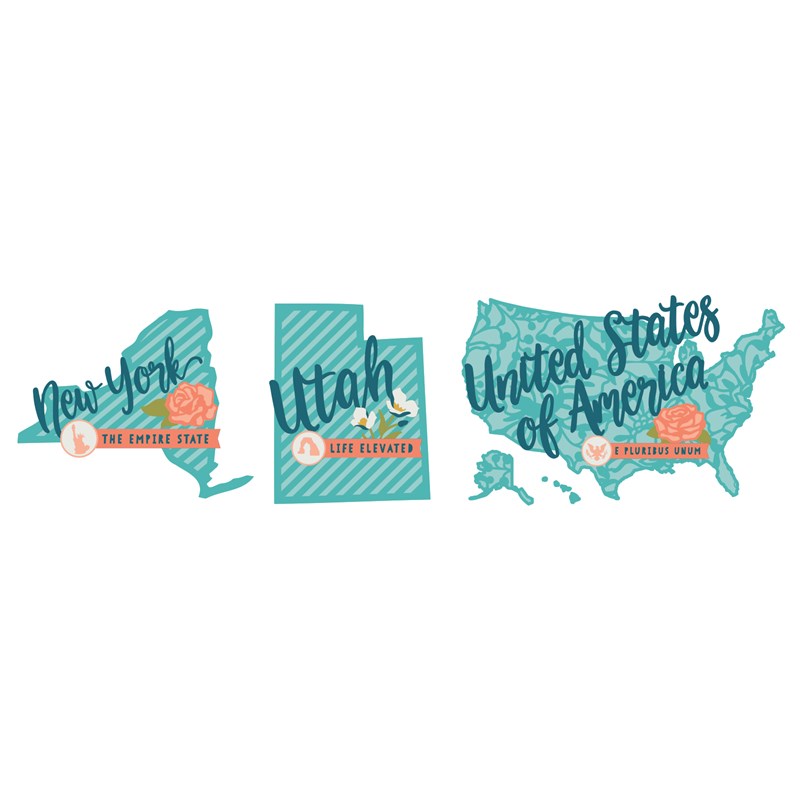 Click to view our EXCLUSIVE Cricut Cartridge! It's only $49.95 for 60 layered images of all 50 states, as well as a local flower, slogan, and state-specific icon! 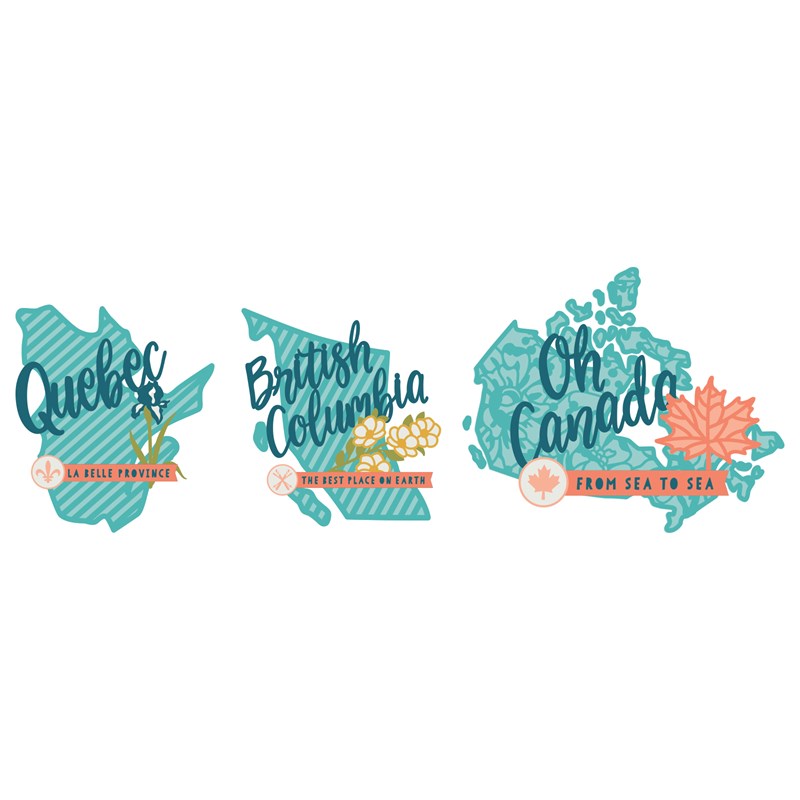 Click to view our EXCLUSIVE Cricut Cartridge! It's only $24.95 for 20 layered images of the Canadian provinces and territories, as well as a local flower, slogan, and coordinating icon! 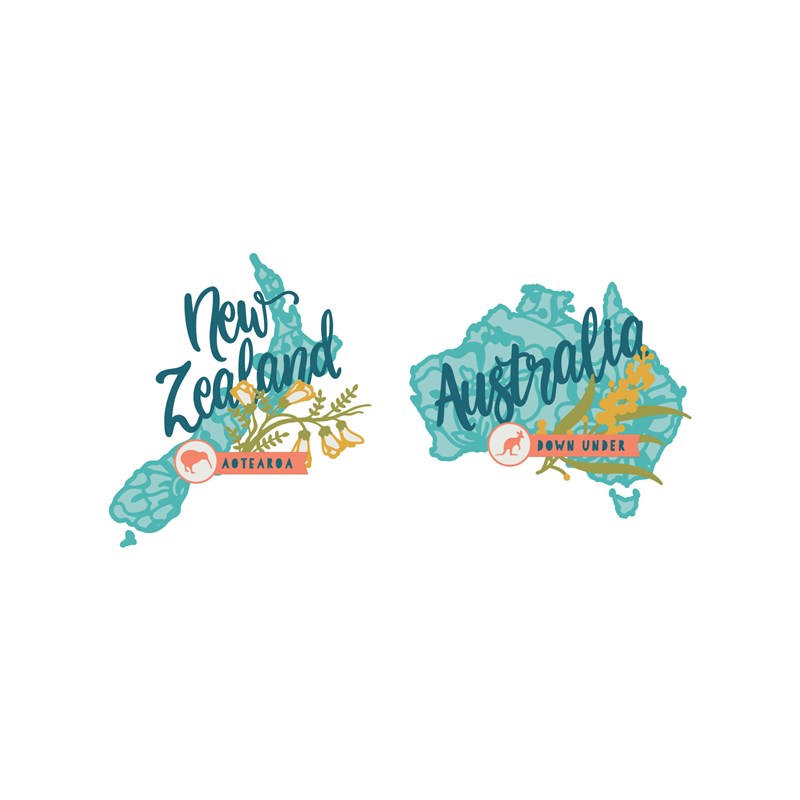 Click to view our EXCLUSIVE Cricut Cartridge! It's only $24.95 for 20 layered images of the Australian and New Zealand states and territories, as well as a local flower, slogan, and coordinating icon! 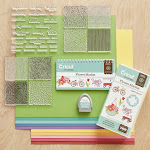